Having heard about this place in Batang Kali that had started selling Bamboo Briyani, we decided to drop by last weekend. Bamboo Briyani is the in thing now that is making waves in the Klang Valley and I had checked their Facebook page and it seems like there's lots of positive reviews. In fact, positive reviews was all that I could find and not a single negative review. 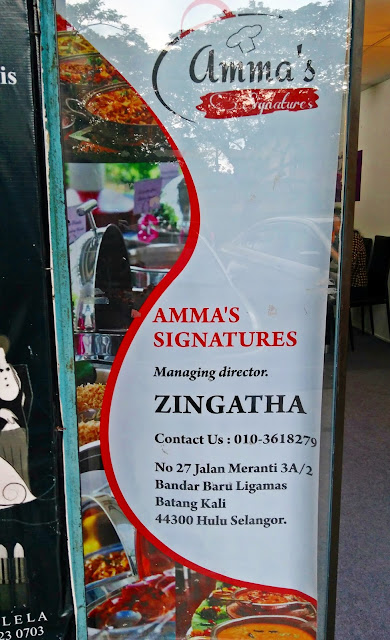 Initially it was quite a challenge to find this place as I was looking for a restaurant. Only when I called them, I realised that it's just a small space in one of the rows of shops. To get here, Google Bandar Baru Ligamas Batang Kali and use Google Maps to get you there. Once you're at the junction, turn right into this housing estate and you would see a Shell Petrol Station on your left. Shortly ahead, there is another traffic light. Keep going straight and look on your left side for King's Bakery. These guys are located right beside them and just a half shop. What I understand is that their main business is catering and they have been doing that for over a decade now. Only recently, about a fortnight to be precise, have they started doing this Bamboo Briyani and have opened up the outer office area as a small eatery. Lots of orders are received through phone calls and mostly they deliver right from Tanjung Malim up to Kuala Lumpur for a charge depending on the location. If you want to dine in, best to call them a day in advance and book your table. Mention the time of arrival, the type of Briyani that you want and number of pax. When I was here, there was a table that was booked by a Singaporean couple and another by someone from Penang. That is the kind of popularity that these guys have gotten in the last few days. In terms if the variety of Bamboo Briyani's that they have, they are Chicken Briyani, Fish Briyani, Mutton Briyani, Crab Briyani, Prawn Briyani and also Vegetarian Briyanis. I only called in earlier in the morning, around 10 am and they were fully booked and only had Chicken Briyani left. So, I went for that and the number of Briyani's that they had was for exactly three pax which was what I needed.


Service is very personal here and you feel like you're dining in a friend's house. There's no such thing as portions for Raita and the sides. They would serve you in a large container and you can take how much you want. These containers are left on your table till you finish your meal. Even if you want extra rice, that can be arranged as well. Do note that they do not serve drinks and only have bottled waters. Coming to their Onion Raita, it was good and tasted very much like home cooked food. If I were to rate this, I would give it 9/10.


Besides the Raita, they also served us some delicious Potato Kuttu and it was amazingly good. The semi mashed potatoes were cooked with lots of spices and it tasted like it was made with passion. 10/10 is what this deserves.


They had some Mutton Perattal left overs and they served it to us at no additional charges. It's really nice of them to treat customers this way. The feeling is so good and this was delicious. Again, I would give this 9/10.


Since we had ordered for three pax, it came in a large Bamboo and goodness, it looked so good. There's three large chunks of chicken and three hard boiled eggs as well. The Bamboo Briyani came with lots of gravy and it tasted absolutely heavenly. It is served in a large container and you would need to mix them all up and finally enjoy this heavenly meal on Banana Leaves. With all the additional sides, it was a mere RM 19.90 per pax. If you're in search of a good Bamboo Briyani, I would definitely recommend these guys. Amma's Signatures was definitely a class of it's own and I am definitely coming back for more soon. 10/10 is what I shall rate this.