Restoran Al-Esfan is a pretty famous chain of Indian Muslim restaurants that has a strong presence in the Klang Valley. Though I have never visited any one of their outlets in the past, I do remember seeing them in numerous locations. Today, I happened to be in Batu Caves area during lunch and their restaurant was just across the street. Since it was already lunch hour, I decided on giving this place a try. 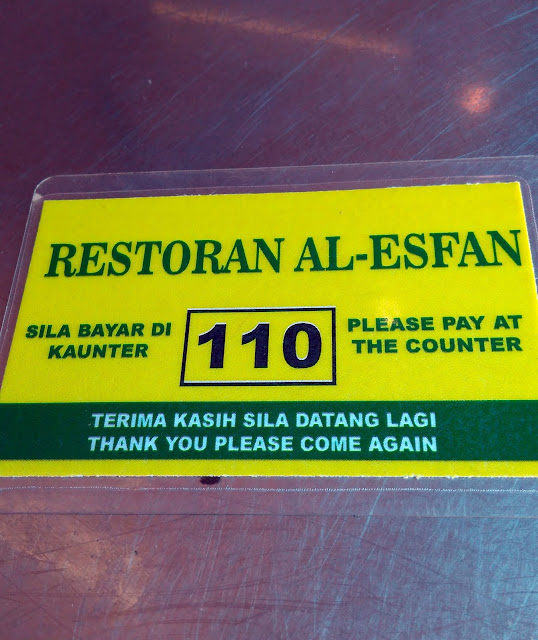 This restaurant had a typical Malaysian restaurant set up. Just like most Indian Muslim restaurants, the concept was similar. Head over to the curries station, pick your items and then pay later. They did have a decent spread but there wasn't much options for vegetarians. Most of their items were non vegetarian dishes except for one or two vegetables.


I had some rice, a slice of Curried Tenggiri Fish, some Fish Curry, Cabbage Perattal and some Fried Bitter Gourd. For this lot, I was charged RM 7.10 . Honestly, I feel that their prices are on the high side. I could have had a similar meal for slightly over RM 5.00 anywhere else.

Their Fish Curry was decent. I felt that they were sufficiently spiced and not too diluted. Taste wise it was something that I had enjoyed too. Similarly, their Curried Fish was good too. Not overcooked and it was just right. My rating for both the above shall be 7/10.

Fried Bitter Gourd was good. Loved the marination they were crisp and tasty. Went perfectly well with the Fish Curry. Their Cabbage Peratttal was good as well. I would rate both at 8/10.

I find the food here to be decent. The vegetables as well as the fish that I had were nice. Even their curries were good. My only grievance would be the slightly high prices for a day to day restaurant. Otherwise, a decent restaurant to have your meals.