Today I was looking around for a place to have supper but due to the Chinese New Year holidays, most of the places were closed. In fact, I even went up to Seapark to try the Bumbung Nasi Lemak there and even that was closed. As I was heading back through SS2, saw this place offering buffet durians for RM 9.00 per person. Having been tired after a long day, we decided not to go any further and just stop here for Durian buffet.


This is the first stall and is followed with another two stalls. The middle one was close but the last one was open. Seems that there was more people there but they did not have the buffet concept. This stall calls themselves Dr Durian.


We walked towards this stall. The catch line was RM 9.00 per person but when I walked in to the stall and enquired, he mentioned that it is RM 15.00 today. Reason, RM 9.00 is only for Monday to Friday and weekends and Public Holidays it is RM 15.00 per person.


As you can see, they were almost sold out. He mentioned since there was just two of us, he would start with three fruits and they seemed pretty big to me and we agreed to this. Both of us are not much of Durian eaters ourselves.

We took our place and the fruits started coming in. Time to have a feast of Durians.Not really sure how many we can eat though.

This was the first type to arrive. The fruit was good. I was told it is the D 101 variety. Honestly, I do not know much about Durians and just listen to this guy. Seemed pretty okay to me. It was fleshy but the seeds were slightly large too. 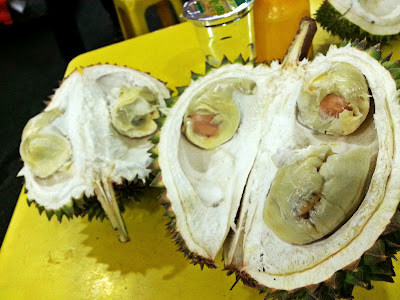 This was the second fruit we had. I do not really know what variety this was but the fruit was bad. Really no taste at all. Felt like eating chalk. The flesh was so little and the seeds mega big.

This was definitely the best one among the lot. It was super sweet and creamy, massive flesh and extremely small seed. By the time we finished this third fruit, we were already very full. He wanted to pick up the next fruit but we told him no. We then just paid RM 30.00 for the fruits and then head back. I think this place is not bad to have Durians compared to that of Donald's which is extremely expensive.